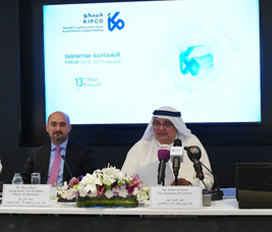 At its annual Investors’ Forum, KIPCO – the Kuwait Projects Company – said that while 2016’s difficult trading conditions are expected to result in revenue growth in the high single digits for KIPCO, the company remains on track to double its 2014 profits by 2018. This is driven by the continued growth of the company’s core businesses, which are forecast to generally deliver revenue growth in the two digits in 2016.

At the company’s annual Shafafiyah (transparency) Investors’ Forum, KIPCO presented a review of 2015 and its outlook for 2016 to 2018 to an audience of shareholders, financial analysts and institutional investors.

The forum followed the company’s General Assembly meeting where KIPCO’s shareholders approved a cash dividend of 25 per cent (25 fils per share).

As part of its review, KIPCO said that it has maintained its exemplary track record and that 2015 was its twenty-fourth consecutive year of profitability. It also highlighted the company’s strengthened funding profile after raising US$ 500 million under KIPCO’s Euro Medium Term Note (EMTN) Program and extending the average debt maturity to 3.6 years. This will result in an annual interest saving of US$ 20 million from 2017 onwards.

Also as part of its 2015 review, KIPCO said that Burgan Bank – one of the company’s largest revenue makers – continues to grow robustly. As a result of efficient capital management under Basel III, the bank’s capital adequacy is expected to be at around 16.5% by the end of March 2016. During 2015, the bank received an A+ rating from Fitch and opened a representative office in the UAE.

For OSN, the pay-tv company secured a US$ 400 million syndicated loan, reflecting investor confidence in its business model. The company’s subscriber base and revenue increased 2.6 and 2.5 times respectively from 2010 to 2015, and 2015 also saw the payment of US$ 100 million in dividends to OSN’s shareholders.

A mega real estate development was announced in 2015 and construction will begin in 2016 on prime land in the area of Daiya, at the heart of Kuwait City. The project, which will cost close to US$ 2.5 billion when completed, will have a leasable area of around 400,000 sq.m. and comprise mostly of residential units, alongside restaurants, health clubs, clinics, retail units and a hotel.

For SADAFCO, the dairy company has increased its total shareholder return by 2.3 times over the past five years, standing at over 20 per cent in return on equity in 2015. This success is driven by the company’s leading market position, large distribution network and strong operational performance.

In its outlook for 2016, KIPCO said it expects that its portfolio of core companies – which includes Burgan Bank, OSN, Gulf Insurance Group, United Real Estate and KAMCO – will continue to deliver revenue growth over the next year, generally in the double digits.

“Over the past two years, we have seen a consistent double digit financial growth trend for KIPCO’s core businesses. In last year’s Shafafiyah Investors’ Forum, we promised to double our 2014 profit by 2018, and our companies are on track to deliver this. Revenue for Burgan Bank increased 12% in 2015, while that of both OSN and Gulf Insurance Group was up 11%, and United Real Estate raised its revenue by 17%. These results are a strong indication that our core companies will continue to deliver growth in the double digits.”

Commenting on the outlook for 2016, Mr Al Ayyar said:

“We enter this year with the expectation that it will continue to bring difficult trading conditions. While KIPCO is moving forward confidently along the track of doubling its 2014 profit by 2018, we expect these global market circumstances to result in revenue growth in the high single digit for KIPCO in 2016.”