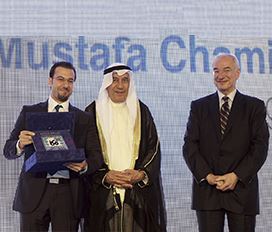 The awards were presented by KIPCO’s Board Member, H.E. Abdullah Bishara, and Group Chief Operating Officer, Mr Samer Khanachet, at the company’s 10th Annual Gala Dinner which took place in the Sheikha Salwa Hall at the Marina Hotel, Salmiya. The event brought together over 400 KIPCO Group employees from over 20 companies across the MENA region.

The ‘KIPCO Group Best Company of the Year 2016’ was awarded to United Facilities Management (UFM). UFM, a subsidiary of United Real Estate, is bringing experience and expertise in facility management to new markets in the region. The award was presented to the Vice Chairman and CEO of UFM, Mr Ahmad Al Kandari.

The ‘KIPCO Group Employee of the Year 2016’ award went to the Pulsar Knowledge Center (PKC) Team for successful business growth and expansion. The award was presented to the CEO of PKC, Mr Narendra Baliga.

The winner of the ‘KIPCO Best Employee of the Year 2016’ was Mr Moustapha Chami from the Accounts and Finance Department.