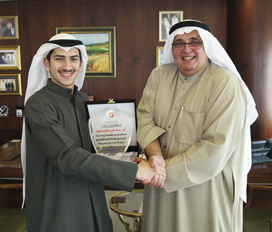 KIPCO – the Kuwait Projects Company – was recognized by the National Union for Kuwaiti Students – USA Branch (NUKS-USA) for its Platinum Sponsorship of the student body’s 32nd conference. The conference was recently held in San Diego, California.

KIPCO’s Vice Chairman (Executive), Mr Faisal Al Ayyar, received the student representatives and commended them on their efforts to provide support and assistance for close to 11,000 Kuwaitis studying in the United States.

“Supporting Kuwait’s young generation is at the heart of KIPCO’s contributions to the society. We believe in the instrumental role that young people will play in the development of our country, and our participation in the NUKS-USA conference offers us the opportunity interact with tomorrow’s leaders and to better understand their visions and aspirations for Kuwait and its future.”

The student representatives expressed their appreciation for KIPCO’s support of this event for the fifth consecutive year. This year’s conference was attended by around 3,500 Kuwaitis studying in the United States.