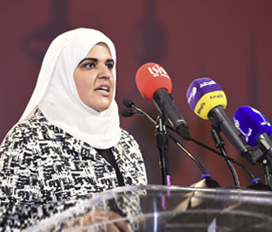 KIPCO – the Kuwait Projects Company – is participating in the 32nd Conference of the National Union of Kuwaiti Students – USA Branch (NUKS-USA) for the fifth consecutive year. KIPCO is a Platinum Sponsor for the event, which is being held on November 25-28 in San Diego, California.

“With young Kuwaitis accounting for more than 70% of the population, both the government and the private sector are placing great importance on this segment of the society. KIPCO believes that Kuwait’s social and economic development depends heavily on the creativity and innovation that this young and talented generation has to offer.”

“As part of KIPCO’s business philosophy, we seek ways to support young people as they graduate and take on the opportunities available to them in different business sectors. This is why it is important for us to interact with students such as yourselves, who are being educated in some of the world’s best universities, and to understand how to utilize your knowledge and international exposure to achieve greater levels of success at the personal, business and national levels.”

KIPCO and its Group companies also participated in the Career Fair, which included an interactive session led by social media celebrity, Ali Al Fadhala, known as 228. The students were quizzed about the companies and those who answered correctly each received an X-Change Prepaid Card from Burgan Bank, worth US$ 300.

KIPCO and several of its Group companies will be engaging students in several events over the course of the conference.