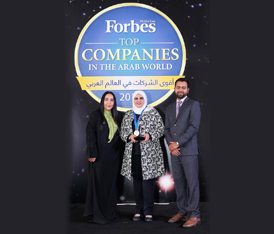 KIPCO – the Kuwait Projects Company – announced today that it was recognized by Forbes Middle East as a Top Arab Company for the second consecutive year. KIPCO’s recognition was in the diversified business category.

KIPCO’s award was announced during the ‘Forbes Middle East Top Companies in the Arab World 2015’ gala dinner, which was held at the Oberoi Hotel in Dubai. The event recognizes publicly listed companies that, through dynamic and strong leadership, are shaping the future of Arab economies and making an impact on a global scale. Companies were ranked according to their total revenue, net profit, total assets and market capitalization.

“We are pleased to be receiving this important recognition for the second consecutive year. KIPCO’s portfolio of investments spans across a number of important sectors across the region. As leaders in the MENA region, we are shaping the business landscape of the economies in which we operate and supporting their development and growth. This award is a reinforcement of KIPCO’s success in achieving business excellence.”