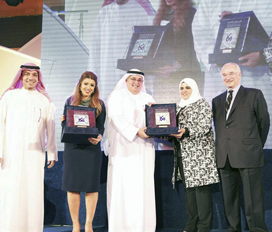 The awards were presented by KIPCO’s Vice Chairman (Executive), Mr Faisal Al Ayyar, and Group Chief Operating Officer, Mr Samer Khanachet, at the company’s 9th Annual Gala Dinner which took place in the Sheikha Salwa Hall at the Marina Hotel, Salmiya. The event brought together over 350 KIPCO Group employees from over 20 companies across the MENA region.

The ‘KIPCO Group Best Company of the Year 2015’ was awarded to Gulf Insurance Group. GIG has been with the KIPCO Group since 1996 and has grown to become one of the MENA region’s leading insurers. The award was presented to GIG CEO, Mr Khaled Al Hassan.

The ‘KIPCO Group Employee of the Year 2015’ award went to the management team of Gulfsat, a subsidiary of United Network, for their achievement. The award was presented to the Chairman of United Networks, Mr Mahmoud Al Sane, Gulfsat CEO, Mr Mohammad Al Haj, and his team.

The winners of ‘KIPCO Best Employee of the Year 2015’ were Ms Eman Al Awadhi and Ms Abeer Al Omar.