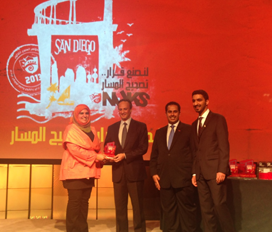 KIPCO – the Kuwait Projects Company – hosted a dinner in honor of the students participating in the 30th Conference of the National Union of Kuwaiti Students – USA Branch (NUKS-USA) following the Closing Ceremony.

The MC for the evening was Khaled Al Ansari from Marina FM, who presented a trivia segment and some entertainment activities. The winners took home gifts including smart devices from KIPCO, Multi-Currency X-Change Cards from Burgan Bank, and luxury items from the American University of Kuwait.

During the Closing Ceremony, KIPCO was recognized for its continued support of the NUKS-USA Conference, the largest gathering of Kuwaitis outside of their country. This is the third consecutive year that KIPCO has been a Platinum Sponsor of the event.

“By assisting Kuwaiti students who have travelled abroad to study in leading universities, NUKS performs a highly important role for Kuwait. We are proud and honored to have been part of this unique annual gathering. KIPCO has always been a keen advocate of developing the skills of tomorrow’s leaders to ultimately create a more sustainable balance in the continued advancement of the State of Kuwait.”

As the Platinum Sponsor of the event, KIPCO addressed the students at the Opening Ceremony. The company also held the ‘KIPCO Economic Forum’ where it was represented by Mr Mohammad Al Zanki, Senior Relationship Manager – Corporate Banking Group at Burgan Bank, the largest member of the KIPCO Group.

Marina FM, a member of the KIPCO Group, was also present as a Media Sponsor of the event and was covering its activities.

Representatives of KIPCO Group, including Burgan Bank and the American University of Kuwait, were present at the Job Fair to highlight different career opportunities for graduating students across the private sector in Kuwait along with providing other advisory services.